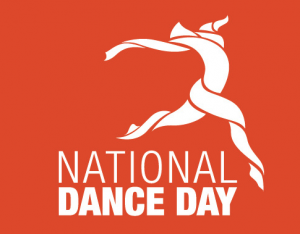 Saturday, July 25th is National Dance Day. People from all over the country come to shake their booty. This auspicious day is an “unofficial” holiday, but it achieved national recognition in 2010 by Congresswoman Eleanor Holmes Norton to promote and support dance education and physical fitness.

The originator of the event is the co-creator of the program So You Think You Can Dance, Nigel Lythgoe. All forms of dance are celebrated – from classical to street improv. Host cities provide event support via local contractors for staging, lighting, caterers and accommodations as they are expecting party buses to show up filled with dance troops, and individuals arriving in town to make their solo debuts.

Dance plays a crucial role in supporting the well-being not only of the physical health, but also the emotional and spritual well-being of a culture. Dancing has been acknowledged as a core value to any society, and is now recognized as a fundamental mainstay of a healthy culture.

Several hundreds of thousands of years ago our ancestors danced. It was used as a main form of communication and spoke volumes about the status of the community. How was their relationship with nature, with each other and with the great force of life? It was all told through dance. Our relatives from the start of time have used dance and ritual to explore and express their search for meaning. Dance was at the center of all rituals. It was incorporated into the celebration of birth and death of humans as well as the cycles of nature. Dance became the expression of happiness as well as grief.

Dance is considered a pure form of expression. Moving our bodies to the sound of music, expressing our inner rhythm to the primal beat of a drum is a way of repairing a fragmented self. Dance unites the parts of ourselves we feel are separate. For even a few moments it can seal the cracks of a hemorrhaged sense of being, and make us feel whole.

Take modern hip hop as a cultural expression. Born in the heart of the African soul it has found its way onto the streets of America. It was reborn again from the youths who needed a way to re-channel their anger and discontent into an art form that was big enough to contain them. Using imaginative choreography, exquisite synchronization and a blend of art and acrobatics, a pure expression of spontaneity, joy and electrifying spirit found its way into contemporary culture. The dancers see hip hop as a ritual of unification.

At first glance, and maybe not as apparent, dance can be used as a vehicle into a trance state transporting the dancer into a state of ecstasy. The ritual of the whirling dervishes, for example known as sema, dates back to the thirteenth century. While dancing, the dervishes go into bodily prayer through spinning which creates a relaxing and hypnotic effect transporting them into a higher consciousness.

During these trance states the devotees open a portal for guidance to the spiritual, heavenly world. We’ve all seen some form of this this at our favorite clubs late into the night – and maybe the ecstasy was involved before the music even started, but the point is all around the dance. Dance has the ability to take us to other places outside the norm.

National Dance Day is now a thing. It’s celebrating its fifth year and is getting more attention and attendees every year. Whether its traditional or a more contemporary display of this primal art, dance is in our bones, in our souls and is here to stay and continue to evolve.

Get your feet moving. What is your preferred form of dance? Where do you express your inner bad – -s self? Where do you let go into the bliss of movement and music? Leave me a comment below. I want to hear from you!